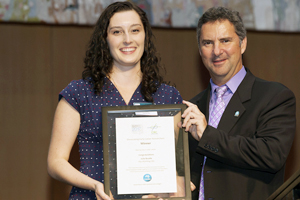 Based at the MARCS Institute, Western Sydney University, Julie’s research has taken a more holistic approach to assessing listening abilities by demonstrating that what a person sees can impact on how well they understand speech in noise.

“Many older adults can have good hearing or have had their hearing corrected by hearing aids, but they still struggle to understand speech in everyday noisy situations,” Julie explained.

“Hearing well is very different from listening well. There are other cognitive considerations at play when it comes to listening, and these factors should be included in standard clinical listening ability assessments.”

Cognitive skills that are important for listening such as working memory and attention tend to become less efficient over time. This can contribute to difficulty understanding conversations in noisy environments such as restaurants.

“For my research, younger and older adults with good hearing completed a series of attention and memory tasks. The results gave me an indication of an individual’s cognitive abilities. Next, I measured how well these same people understood speech in noisy situations,” Julie said.

Julie also discovered that when she removed extra visual distractions from the listening situations, such as people talking in the background, while leaving the face of the talker being listened to, older people understood up to 50 per cent more than when they have to deal with both visual and auditory noise.

These results are important for two reasons: one, older adults seem susceptible to visual distractions, which could contribute to difficulty understanding speech in cocktail-party listening environments and two, looking at a person’s face while they talk should help.

The results of this research will be incorporated into Julie’s PhD thesis, which is developing a new listening test that more accurately reflects communicating in real life situations by including both visual and aural noise distractions.

An important part of this study will be evaluating how age and cognitive factors like attention and memory can impact on test performance.

You can watch Julie’s video submission to the 2017 CRCA Early Career Showcase below.